Sources in eastern Tibet have told Tibet Watch of around 30 arrests connected to the birthday celebrations of the 14th Dalai Lama. Details of the majority of those arrested are yet to be confirmed but the arrests are connected to increased digital surveillance operations in the area. Six of them have been identified.

Two Tibetans in their 40s, Kunchok Tashi and Dzapo, were arrested for allegedly sharing photos of the Dalai Lama on social media and encouraging others to recite Tibetan prayers on the occasion of his 86th birthday on 6 July. They hail from Kyaglung Town, Garze Tibet Autonomous Prefecture, eastern Tibet.

Sources expressed the heightened level of fear and surveillance restricting Tibetans from contacting foreign media, including their families in exile. In the lead-up to the Chinese Communist Party’s (CCP) centenary on 1 July, incidents of a series of arrests and arbitrary detentions were shared at great risk. Due to the impossibility of any human rights violations news being covered by the media in Tibet and demanding justice from the Chinese government, sources in Tibet are reaching out to foreign media outside Tibet to hold the Chinese government accountable for its repressive policies in Tibet. 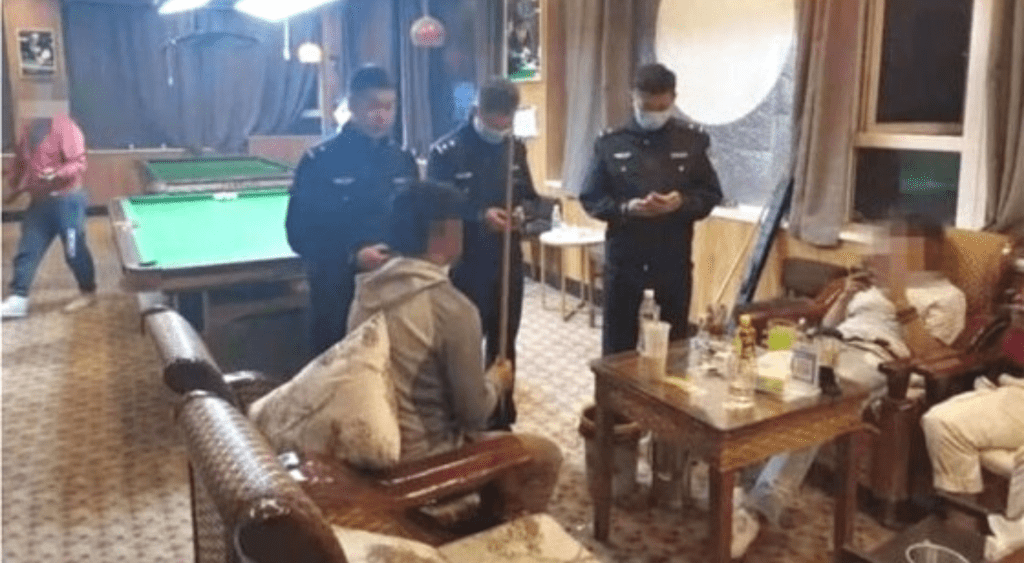 Search operations being carried out in Tibet

Chinese authorities arrived unannounced and methodically conducted digital search operations in Golog and Serthar County earlier this month. On 13 July, four Tibetans, Loga, Dather, Wangchuk Kyi, and Rinchen Sangpo, were arbitrarily detained by authorities after the contents of their phones were investigated and digitally searched under suspicion of keeping photos of their revered exiled spiritual leader, His Holiness the 14th Dalai Lama. On the day of arrest, before the police arrived unexpectedly, they were working at a restaurant in Serthar County on their school holiday to gain some job experience. Their phones were searched also for content regarded by Public Security Bureaus as “politically sensitive.” Tibet Watch received photographic evidence of two to four police conducting phone checks in streets, restaurants, grocery stores, and karaoke bars.

Ahead of the Dalai Lama’s 86th birthday, in addition to the prohibition of visible manifestations of faith to the Dalai Lama like religious events, his photos and videos, Chinese authorities also banned symbolic cultural practices such as throwing prayer flags in the sky and offering Sang -powdered incense- in the region of Serthar and Golok of eastern Tibet.

Throwing in the sky small prints of a prayer flag, known in Tibetan as Lungta (Tib: ཀླུང་རྟ་ རླུང་རྟ་), translated in English as Windhorse, at sacred sites during auspicious occasions is accompanied often by Tibetans shouting “Victory to the gods”. In doing so, they assert and renew their hopes and prayers. The offering of sang – powdered medicinal incense – is an integral part of Tibetan culture which shows their respect to the local deities and serves as a purificatory offering for them. On mountaintops and valleys, during gatherings as well as daily circumambulations around temples and monasteries, Tibetans recite prayers and burn a mix of sang (བསང་) and tsampa (རྩམ་པ་)-Tibet’s staple food, roasted barley flour- as a propitiatory offering for the deities. As part of the Lhakar movement, Tibetans in exile observe this important custom, especially on Wednesdays, the soul day of the Dalai Lama. Originating from Tibet after the 2008 Tibetan Uprising, Lhakar (ལྷག་དཀར་), meaning White Wednesday, is when Tibetans assert their identity in numerous, decentralised activities.

Tibetans in occupied Tibet have been subjected to waves of restrictions and ramped-up surveillance, especially since the 2008 Tibetan Uprising and the 159 self-immolations that ensued. The outbreak of coronavirus in 2020, followed by the buildup of the CCP’s history campaign since February, and its centenary on 1 July has reduced physical spaces for Tibetans to gather, practice, and continue their cultural and religious heritage. Social media chat groups, their founders and members are monitored heavily by Chinese authorities, such as the young teenager, Dadul who was beaten and left with broken legs, and Rinchen Tsultrim, a committed language advocate, who was sentenced to four years and six months.