Today, 1 July 2021, the Chinese Communist Party (CCP) marks its 100-year anniversary. Through a series of huge events across China, it will celebrate its foundation in Shanghai in 1921 through to the power it projects today across China and beyond.

Occupied Tibet has not escaped these commemorations. Over the past months, there have been waves of activity across Tibet, both to promote the CCP’s rule and to crack down on any potential dissent. This summary compiles both of these key trends.

Tibet and the CCP

The Chinese occupation of Tibet is a recent development in Tibetan history, but one that has overshadowed every aspect of Tibetans’ lives. Tibetans first encountered the CCP in the 1930s, when Mao and hundreds of thousands of CCP members passed through eastern Tibet as part of the Long March, a key part of CCP mythology but a disaster for Tibetans in areas such as Ngaba, who found themselves having to protect their land, livestock and temples from looting by the better armed but hungry CCP members. But the decisive moment was the invasion of Tibet in 1950, one year after the CCP came to power in the Chinese Revolution. Seven decades on, Tibet remains under occupation, and the Tibetan people have been swept along with many of the key phases of CCP rule, from famine caused by the Great Leap Forward to the destructive excesses of the Cultural Revolution in the 1960s to the mass protests across Tibet in 2008 on the eve of the Beijing Summer Olympics. Since those protests 13 years ago, Tibet has become even more closed and repressive. A key line of continuity throughout these events has been Tibetans’ demands for freedom and for their own way of life to be respected.

Despite repeated protests from Tibetans, the CCP has persisted in promoting a narrative to both local and global audiences that Tibetans are happy under CCP rule. Meanwhile, the Party’s development policies, which in reality are colonial in nature, underpinned by racist assumptions about Tibetans’ traditional way of life and are carried out without the consent or agency of Tibetans, are repeatedly highlighted by CCP officials as being beneficial to Tibet. These claims are broadcast by Chinese state media while Tibetans lack almost any form of free expression.

In this heavily controlled and censored environment, the CCP has promoted a series of propaganda events across Tibet to commemorate its rule and to spread the idea that Tibetans are voluntarily taking part in the celebrations. According to state media, documentaries, TV dramas, music, dances and films would all be created to hail the Party’s achievements, while a new museum about the CCP opened in Beijing. A new handbook called “A Brief History of the Communist Party of China” was also published and promoted, which updates previous official history books issued by the CCP, and plays down events such as the Cultural Revolution. Inspection at Sangling Monastery in Nyingtri

The CCP’s insistence that the “correct” version of history be told was reinforced by a dedicated hotline set up by the Cyberspace Administration. According to a report by RFA, citizens across the People’s Republic of China have been encouraged to report on anyone who challenges the CCP’s version of history, what the announcement called, “ erroneous online remarks relating to historical nihilism”.

In the following months, the CCP has dispatched party officials, police and other personnel to locations across Tibet so that they can publicise the role and achievements of the Party. This has included homes, monasteries and schools. In Yushu Tibet Autonomous Prefecture, cadres visited every family to publicise the CCP’s policy and history, while Chinese police repeatedly visited public schools to speak to students about the founding of the CCP. In photos received by Tibet Watch, more than forty Tibetan schoolchildren at a school in Yushu are pictured clapping in unison before a group visiting police.

In May, a series of Party history propaganda activities were held at Dorje Drak Monastery located in Gongkar County, which is governed as part of the Tibet Autonomous Region. The event, titled ”Learning Party History, Reciting Classics, and Exhibition Style”, was overseen by the Deputy Secretary of the County Party Committee and the Director of the Propaganda Department. The monks and nuns present were ordered to look back on the sacrifices made by the CCP and were forced to write their names on the banner which read ”Good monks and nuns who appreciate favour of the party, listen to the party, follow the party.” Chinese officials distributed selected history books written in Chinese and Tibetan ordered recipients to study and understand the CCP’s history.

Between 22 and 26 June, several CCP organs, namely the United Front Work Department of the Municipal Party Committee, and the Municipal Religious Bureau, gatherings in several major monasteries in Lhasa, Chamdo and Nagchu. The gatherings in these monasteries in central Tibet marked both the 100th anniversary of the founding of the CCP and the 70th anniversary of the peaceful liberation of Tibet, and were entitled “Always follow the Party and the Party is in my heart”.

In schools and monasteries, Tibetans have been forced to write essays, playsand recite poems about the CCP. In the weeks before 1 July, new school textbooks, specially designed for the so-called “minority communities” (including occupied Tibetans) were distributed. These textbooks, with names such as “Manisfesto of the CCP” and “Poetry of Martyrs of the Cultural Revolution”, focus on the political ideologies of CCP leaders from Mao Zedong to Xi Jinping. 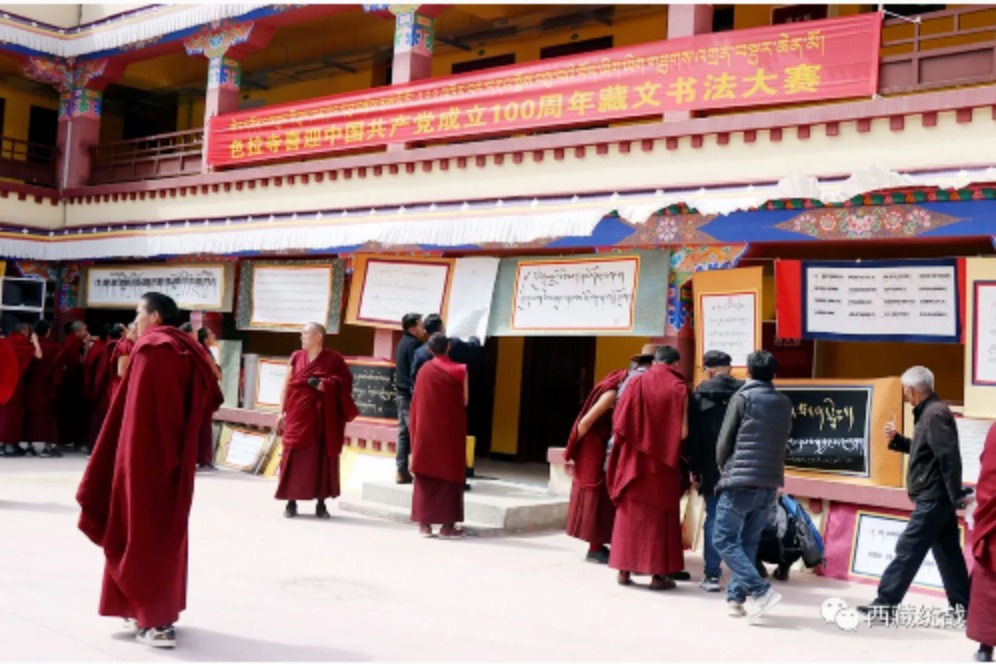 Tibetans have also been forced to participate in heavily-orchestrated propaganda events, such as one that took place in April at Sera Monastery in Lhasa. The monastery’s CCP-controlled management committee announced a calligraphy contest for the monks to celebrate the 100th anniversary of the CCP. Participants were required to follow tight guidelines, being instructed to demonstrate admiration of Chinese policy, love for Chinese leaders and to denounce those defying CCP rule, such as the exiled Dalai Lama and “separatists”. In the months running up to the anniversary, Free Tibet’s research partner Tibet Watch recorded numerous instances of prominent Tibetans, including former political prisoners and writers, being secretly arrested in Serthar County in eastern Tibet. The heavy surveillance and restrictions on communication across Tibet makes it difficult to ascertain whether there have been other arrests and whether they are connected to the Party anniversary celebrations.

Amongst the arrested was Tibetan activist Gangbu Yudrum on 22 March. His whereabouts remain unknown and the reasons for his arrest have not been disclosed. He had previously been imprisoned for three years for his role in the 2008 Tibetan protest in his region where he raised the banned Tibetan flag and called for the return of the exiled Tibetan spiritual leader, the Dalai Lama, then again for two years in May 2012.

The following afternoon, two writers, Gangkye Drubpa Kyab and Seynam, were arrested. Also known as Gangethak, Gangkye Drubpa Kyab has written about the Tibetan struggle and had previously spent four and a half years in prison between 2012 and 2016. Seynam, a Tibetan writer and environmentalist, had previously been arrested in September 2020 along with ten other Tibetans.

On 2 April, the Chinese authorities in Serthar County arrested the activist and former political prisoner, Tsering Dolma. She had previously been arrested in 2008 and 2012 for taking part in protests against China. She was beaten and tortured in prison, leaving her suffering from amnesia, epileptic fits, heart disease, and a broken elbow. Tsering Dolma was kept under close surveillance by security forces following her release. A performance at a school in Dzoge County, Ngaba, eastern Tibet

Tibetans already live in one of the least free and most restrictive places in the world, but the months leading up to the CCP celebrations have seen yet more regulations and prohibitions affecting Tibetans’ freedom of movement, their ability to communicate with one another and on their religious activities.

In every region of Tibet, Chinese authorities have warned that gatherings are not allowed during the Dzamling Chisang, “Universal Smoke Offering Day”, which this year fell on 24 June. Tibetans would typically observe Dzamling Chisang, a festival that records the inauguration in 779 of Samye, Tibet’s first monastery, with summer picnics, wearing traditional dress and offering incense smoke offerings on hill-tops of sacred mountains. However, a source from eastern Tibet told Tibet Watch that this year, the picnic was “banned by higher authorities”.

Other restrictions were imposed in Lhasa, where large groups of Chinese tourists gathered and which was decorated with Chinese flags and red streetlights. Tibetans, in contrast, were unable to move so freely and appear to have been prevented from carrying out the kora, religious circumambulations, around the Potala Palace.

Another source in Yushu confided to Tibet Watch that Chinese authorities were being extraordinarily restrictive ahead of this official centenary celebration, and that Tibetans have been “pressured into silence”. The source advised Tibet Watch not to contact them via social media until the end of August.

The 100th anniversary of CCP rule for Tibetans has taken the form of a series of heavily managed celebrations, political indoctrination and what appear to be pre-emptive arrests of those seen as potential troublemakers. None of these are the hallmarks of a genuine celebration, rather, they are the product of an occupation that Tibetans have never accepted.

Days before the anniversary, footage emerged from Lhasa highlighting the divide between the CCP and the Tibetan people. The short video showed a large image projected onto the Potala Palace, once home to the Dalai Lama, hailing 100 years of the CCP. The narrator observed that Tibetans were once again facing restrictions due to these activities, being forbidden from carrying out the circumambulations, integral to Tibetan Buddhism, around the palace, while the streets were full of Chinese people celebrating freely. As lights turned Lhasa red, the person behind the camera, one of the millions of Tibetans allegedly happy under CCP rule, could be heard weeping.